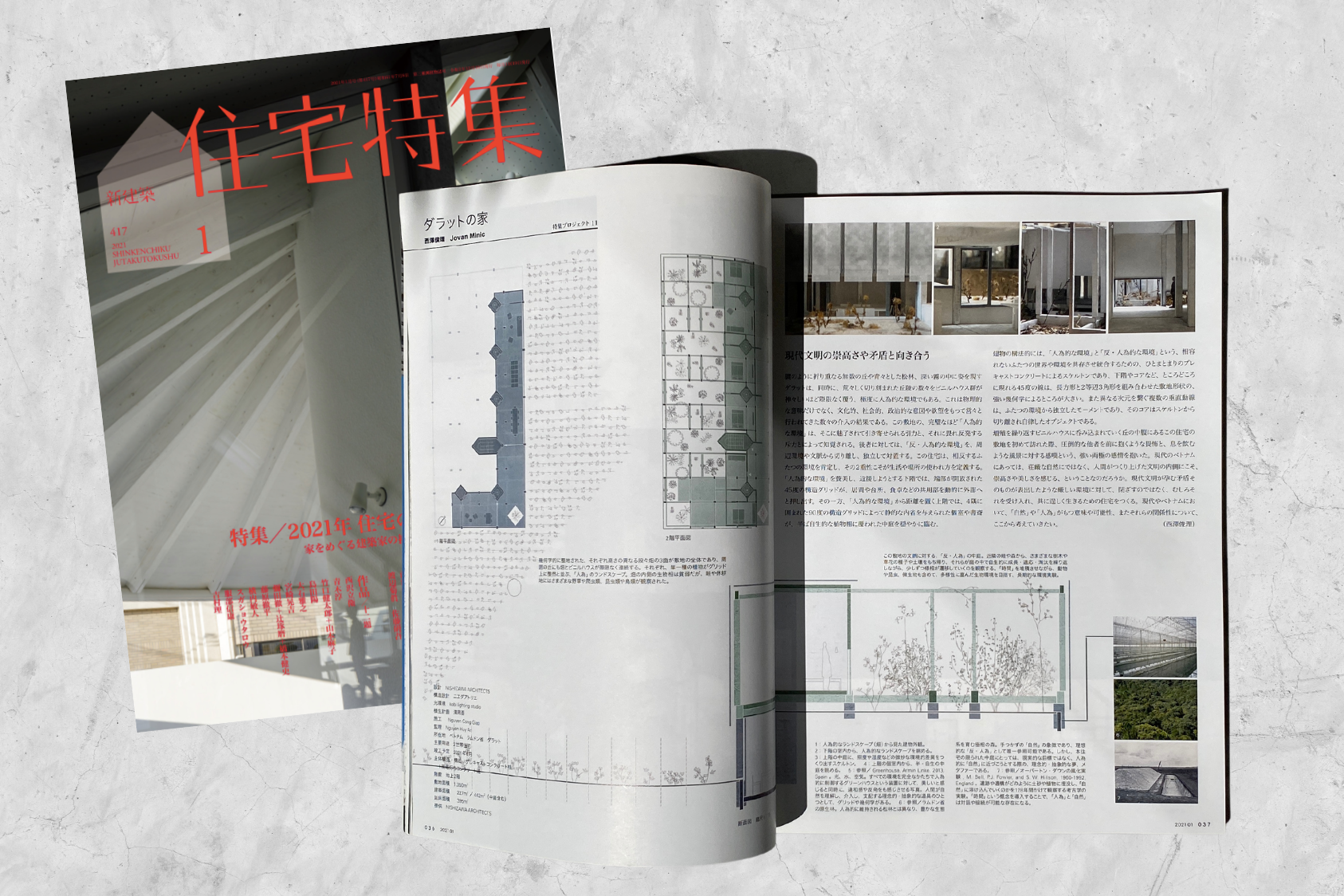 We told you about it a few months ago in an article on light as a source of energy for People, the Villa project located in Da Lat also appeared in Shinkenchiku Magazine, published in Japan.

The article and the project, in the words of the architect, explore the meanings and possibilities of “nature” and “artificial” in modern times in Vietnam, and their relationships. 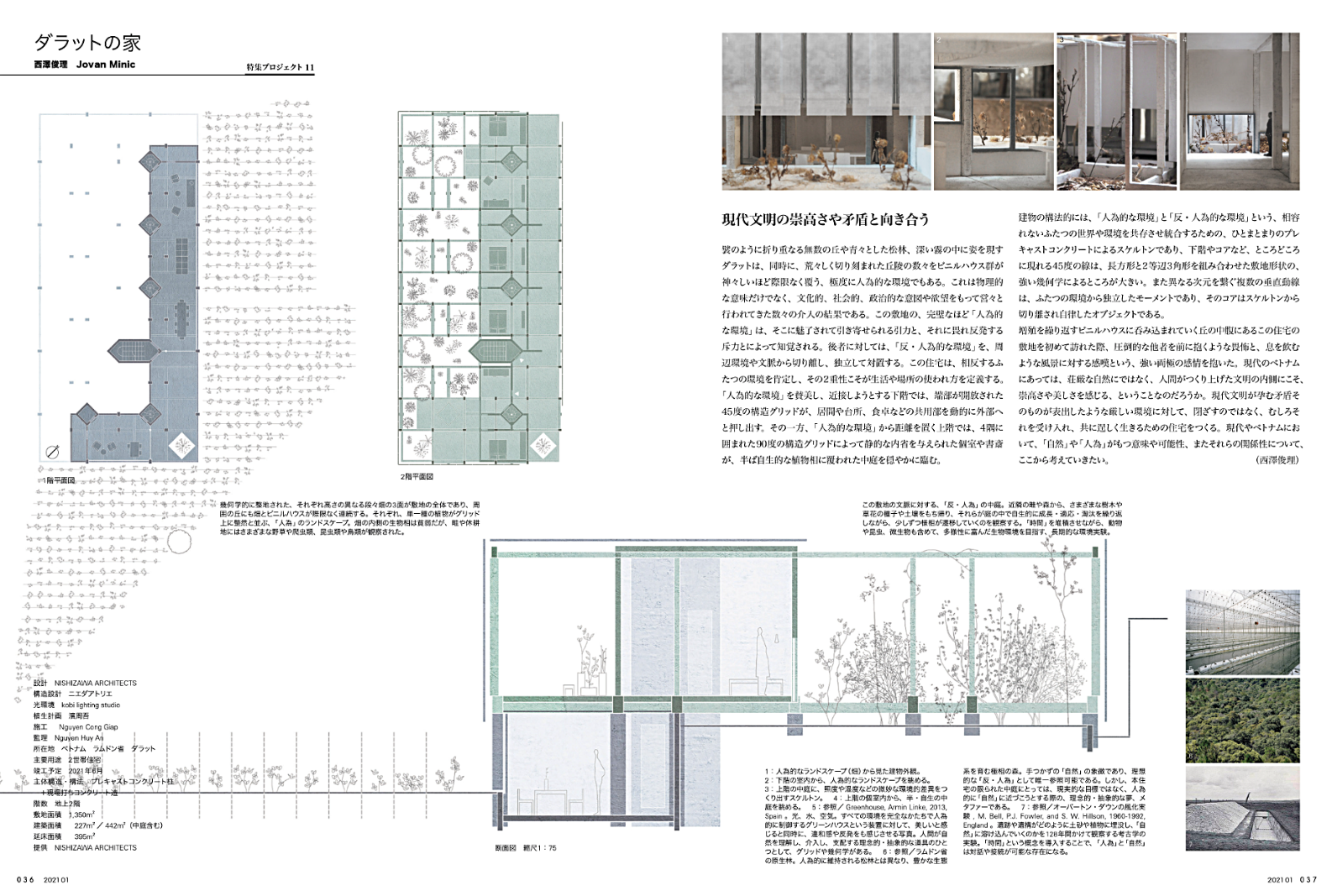 /Text automatically translated from Japanese, please follow this link for the original version and text /

The entire site consists of three terraced fields with different heights, which are geometrically leveled, and the surrounding hills are endlessly continuous with fields and greenhouses. Each of the greenhouse is an “artificial” piece of land in which a single species of plant is lined up neatly. The biota inside the fields is poor, but various wildflowers, reptiles, insects and birds have been observed in the fallows.

Innumerable hills and lush pine forests that fold like clouds facing the sublime and contradictions of modern civilization, Dalat appears in the deep fog, and at the same time, the greenhouses are gods of the hills that are roughly chopped up. It is also an extremely artificial environment that covers endlessly. This is the result of numerous interventions that have been carried out vigorously with cultural, social and political intentions and desires, as well as physical implications. The perfect “artificial environment” of this site is perceived by the attractive and attractive force and the repulsive force that repels it. For the latter, the “anti-artificial environment” Is separated from the surrounding environment and context, and is opposed independently. This house affirms two conflicting environments, and the duality defines how life and place are used. On the lower floors, which praise the “artificial environment” and are approaching, a 45-degree structural grid with open edges dynamically pushes common areas such as the living room, kitchen, and dining table to the outside. On the other hand, on the upper floors, which are far from the “artificial environment”, private rooms and dens, which are given static introspection by a 90-degree structural grid surrounded by four corners, become semi-natural flora. It offers a gentle view of the covered courtyard.

In terms of the construction of the building, it is a skeleton made of a set of precast concrete to coexist and integrate two incompatible worlds and environments, “artificial environment” and “anti-artificial environment”, and the lower floor. The 45-degree lines that appear in places such as concrete and core are largely due to the strong geometry of the site shape that combines rectangles and isosceles triangles. Also, multiple vertical lines connecting different dimensions are independent of the two environments. It is a moment, and its core is an autonomous object separated from the skeleton. When I first visited the site of this house on the hillside, which was swallowed by the growing vinyl house, I was afraid of overwhelming others and admired the breathtaking scenery. I had extreme feelings. In modern Vietnam, does it mean that we feel sublime and beauty not in the majestic nature but in the civilization created by humans? Rather than closing in on the harsh environment that the contradictions of modern civilization itself have manifested, we will accept it and build a house to live together steadily. From here, I would like to think about the meanings and possibilities of “nature” and “artificial” in modern times and Vietnam, and their relationships. (Toshiri Nishizawa)

To read kobi’s approach about the light for this Villa, follow the link : https://kobistudio.com/lighting-design-for-residential-space/